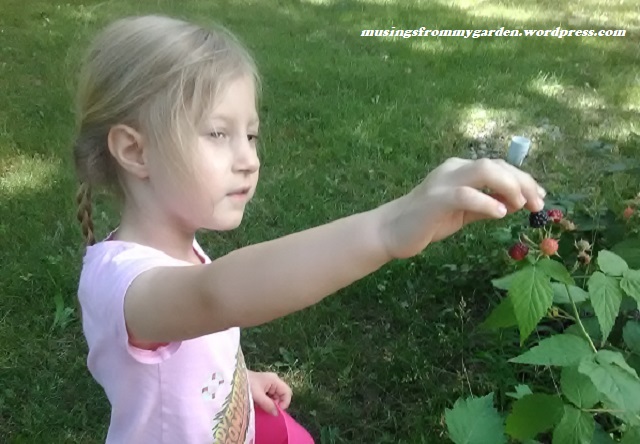 My little one, picking black raspberries in our yard.

A few years ago, I began picking berries to make jam.  My children have some food sensitivities, particularly to artificial ingredients.  We had some raspberries growing in our yard, and on a walk around the block, discovered an undeveloped property brimming with wineberries, a variety of wild raspberry.  My mission seemed clear – learn how to make homemade jam for my peanut butter and jelly-loving but ingredient-sensitive children.

The funny thing is, when we moved in to our home a decade ago, my husband discovered that one of our flower gardens was full of thorny red raspberry bushes.  He asked me whether I wanted to use the berries or whether he could tear them out and plant flowers instead.  I said that I wasn’t partial to raspberries, so do whatever you like.  I never dreamed that six years later, I would be braving thorns and poison ivy at the park and the property around the corner to collect as many raspberries as I could each summer.  I had a few stragglers left in my garden, but not enough to produce a jar of jam.

A couple of years into this, a friend pointed out that the berries in the park could have pesticides sprayed near them, which made them less appealing to me.  I still had some red raspberries in my garden, which were beginning to spread, and I discovered some black raspberries and blackberries in an overgrown area of my yard that my husband had partially cleared.  For wineberries, I still had my spot around the corner.  One day, though, as we took a walk, we discovered that the lot had been sold and was being cleared, so a house could be built there.  Our berry bushes were being dug up!  I suggested to my husband that we transplant one to our yard, which we did – a small one.  Eventually, that bush finally produced fruit and this year it has grown quite a bit, although it would never provide as much as we had been collecting from its original home.

Two summers ago, however, as I was collecting black raspberries on the outskirts of my property, I noticed a distinctive, fuzzy fruit developing nearby.  It was a wineberry bush!  It was not the one planted by me, nor close to it.  It was a new plant that had never been there before.  We speculated that a bird had spread the seeds there after eating some berries from our bush.  This particular bush now dwarfs the one that we planted, by far.  It is well on its way to replacing the place around the corner.  It produced so much fruit this past summer that I could barely keep up with picking it.

It amuses me to think about the time that I wasted worrying about my supply being cut off and tried to rectify it in my own way with my transplant, when God knew all along that He was going to bless me with this plant one day.  In my experience, that’s how it usually is when we rely on our own strength, instead of depending on God.  Our efforts will always be imperfect and pale in comparison to His perfect will and timing.

More importantly, that time spent waiting on Him to provide is usually the most productive in our own spiritual growth.  Learning to trust Him in a way that we never could with an earthly father (or any other human being, for that matter) stretches us in unimaginable ways.  When we stop striving to be our own God, making an idol of our own self-sufficiency, we can finally experience the peace that passes understanding.  We can focus on hearing His voice and being open to direction, which was once crowded out by our worries. .

“Blessed is the man who trusts in the LORD and whose hope is in the LORD.  For he shall be like a tree planted by the waters, which spreads out its roots by the river, and will not fear when heat comes; but its leaf will be green, and will not be anxious in the year of drought, nor will cease from yielding fruit.” – Jeremiah 17:7-8 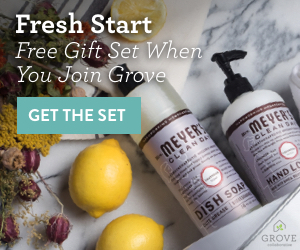